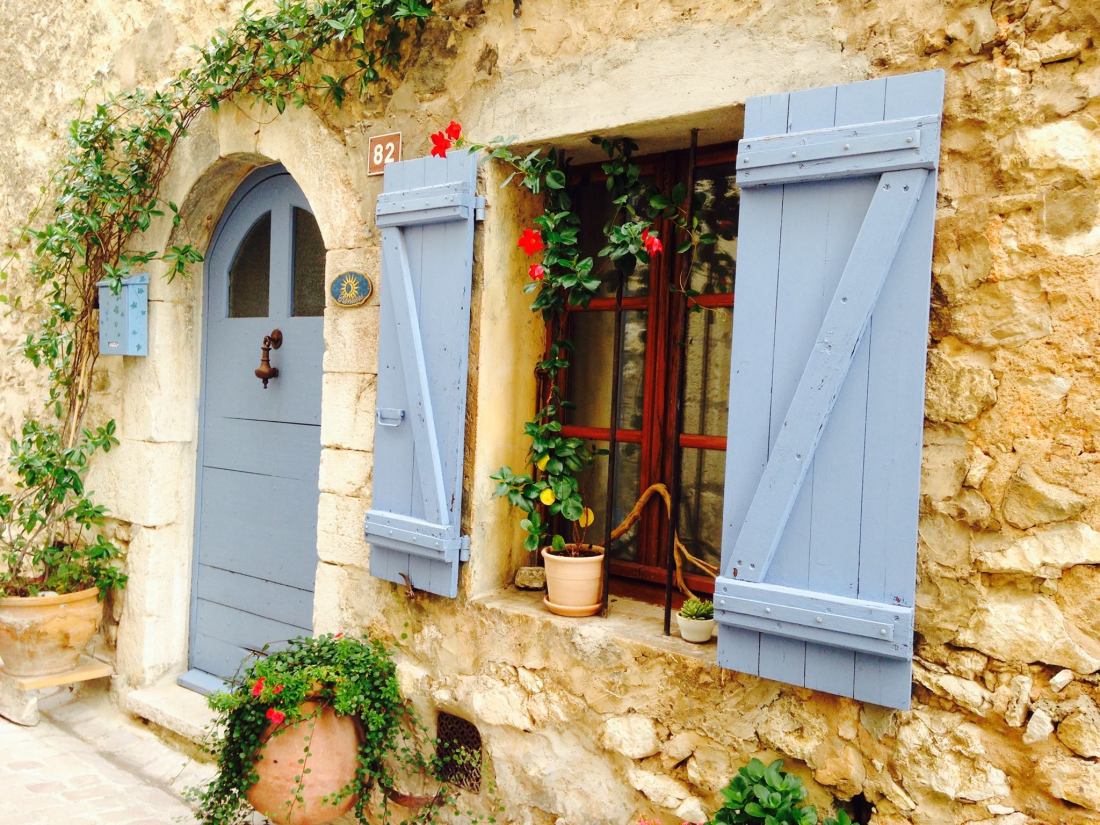 Tiny houses can be magical dwellings.

In books and life, they’re places where people — unencumbered by excess space or distraction — retreat to deepen their relationships with themselves or others.

My enchantment with tiny houses began with The Smurfs because they lived in tiny houses like this:

As a kid, I loved the magic of the Smurfs’ forest, the conjury of Papa’s potions, the adventure of the journeys to visit sages and healers, and the earthiness of the medieval setting.

I loved the show so much, in fact, that when I spent weekends at my grandparents’ house, I would set the kitchen timer for an hour every hour on Friday nights all the way till 6 a.m. on Saturdays when the show came on. I would savor The Smurfs, and then go back to bed and sleep till Scooby-Doo came on at noon.

What I loved about The Smurfs was that they lived in a utopian village in the woods — and that each Smurf had his own mushroom. Or her own mushroom. Personal spaces of retreat where each Smurf worked at their own skill or nurtured their own nature.

I wished fervently for my own mushroom, because all the Smurfs lived so peacefully in those cozy self-governed cottages, but each was also part of the greater Smurf community.

Later on, a book that captured my preteen attraction was V.C. Andrews’ Dark Angel.

I identified with the heroine, a girl who was sent to live in the mansion of her mysterious grandparents. My grandparents didn’t have a mansion, but their house was large to me when I was small and its size and contents were fascinating.

One day, while exploring the grounds of her forebears’ mansion, the girl discovered an English maze.

In its center she found a little cottage.

There lived a forbidden man who she fell in love with, and I was introduced to a contemporary take on the gothic romance.

I slight it here slightly, but it had a profound effect on my psyche. Like an enchanted mushroom, this cottage was a refuge for a character who was in the midst of growing up and developing her identity.

Speaking of which, that’s what Snow White was doing in the dwarves’ little house.

In The Uses of Enchantment (sometimes now spurned as outdated but still carrying interesting insight), child psychologist Bruno Bettelheim says that the plight of Snow White symbolizes her movement from childhood to pubescence, and eventually to love and marriage.

“The peaceful preadolescent period Snow White has while living with the dwarfs before the queen again disturbs her gives her the strength to move into adolescence,” Bettelheim wrote.

Taking refuge from the threat of having her childhood killed (symbolized by her stepmother’s orders that the hunter kill her), Snow White settles for a time in the tiny house of the dwarves.

What their cozy abode offers her is a bit like her ensuing sleep in the forest — a space for rest and pause. Once she leaves the dwarves’ little house, she’s more prepared to grow toward maturity.

In Kate Chopin’s The Awakening, Victorian wife and mother Edna Pontellier is stifled by a lack of personhood. What she views as a “life of caretaking” impedes her desire to feel like a whole human being, someone who can be and do what feels right for herself.

This leads her to leave her husband’s mansion and move to her “pigeon house,” a small cottage that represents independence and liberation.

“The pigeon house pleased her,” Chopin wrote. “Every step which she took toward relieving herself from obligations added to her strength and expansion as an individual.”

For quite a spell the little house appeared in every book I read. There was the gamekeeper’s cottage in Lady Chatterley’s Lover, where Connie, like Edna, discovers a world outside the one she had been bred for.

I think, though my memory is foggy, that there’s a little house, or maybe a gazebo, in The Age of Innocence too, where Newland Archer and the Countess Olenska meet to discuss their love.

Naturally, the characters in books with little houses fare differently as a result of their time in their diminutive dwellings, but a common theme is that the little houses serve as havens where the characters experience something different from the norm of, say, the mammoth mansions they usually reside in.

This makes sense because of the expanse of space in a mansion: All those rooms are filled with distractions and psychic or familial weight and deluded, confining customs.

Often in ancient lore, a shaman, medicine man/woman, or wisdom keeper lives in a small hut or cottage on the edge of the village, navigating the edges of consciousness.

In The Journey of the Hero, Friedemann Wieland describes Merlin’s outsider abode as “a small house, totally overgrown with moss and ferns,” nestled in the clearing of a forest.

Say what you will about Disney, but they certainly captured the atmosphere of his cottage beautifully:

Wise ones like Merlin live in small sylvan spaces to focus their energies not on physical expansiveness, but on soul expansion as priests and priestesses of nature.

One of the coziest tiny houses has to be Mr. Tumnus’s faun cave in The Lion, the Witch and the Wardrobe.

In his tiny cave, Mr. Tumnus leads a quiet life, tending to a toasty fire that insulates him from the frost-bound tyranny of the White Witch’s spell. It’s his sanctuary, where he retreats to play his flute and dream of midnight dances with the dryads.

… the place where the writer finds the peace to create.

When I was in writing school (which is to say when I belatedly pursued my bachelor’s degree at a low-residency liberal arts college, which sadly no longer exists, and which helped me become what I always knew I was), I started my self-designed studies with a look at how other writers work.

I browsed a book called The Writer’s Desk with photos by Jill Krementz, Kurt Vonnegut’s wife, and became captivated by this image of E. B. White writing in his little boathouse in Maine:

That’s the tiny house, I thought, where the writer retreats in solitude to develop their work.

A couple years ago I attended a conference where writer Ann Handley talked about having built a tiny house to write in.

She also mentioned having pursued as many pen pals as possible as a child, and talked about creating different lives for herself to write to each pen pal about, so the tiny house wasn’t the only writerly parallel that caught my ear. But it certainly grabbed me.

Many writers quest the tiny house. Thoreau, Roald Dahl, Mark Twain, Michael Pollan, Virginia Woolf… it seems that at one point or another, everyone whose heart is bound to words is compelled to seek a cabin, a mushroom, a boathouse, or a room of their own. 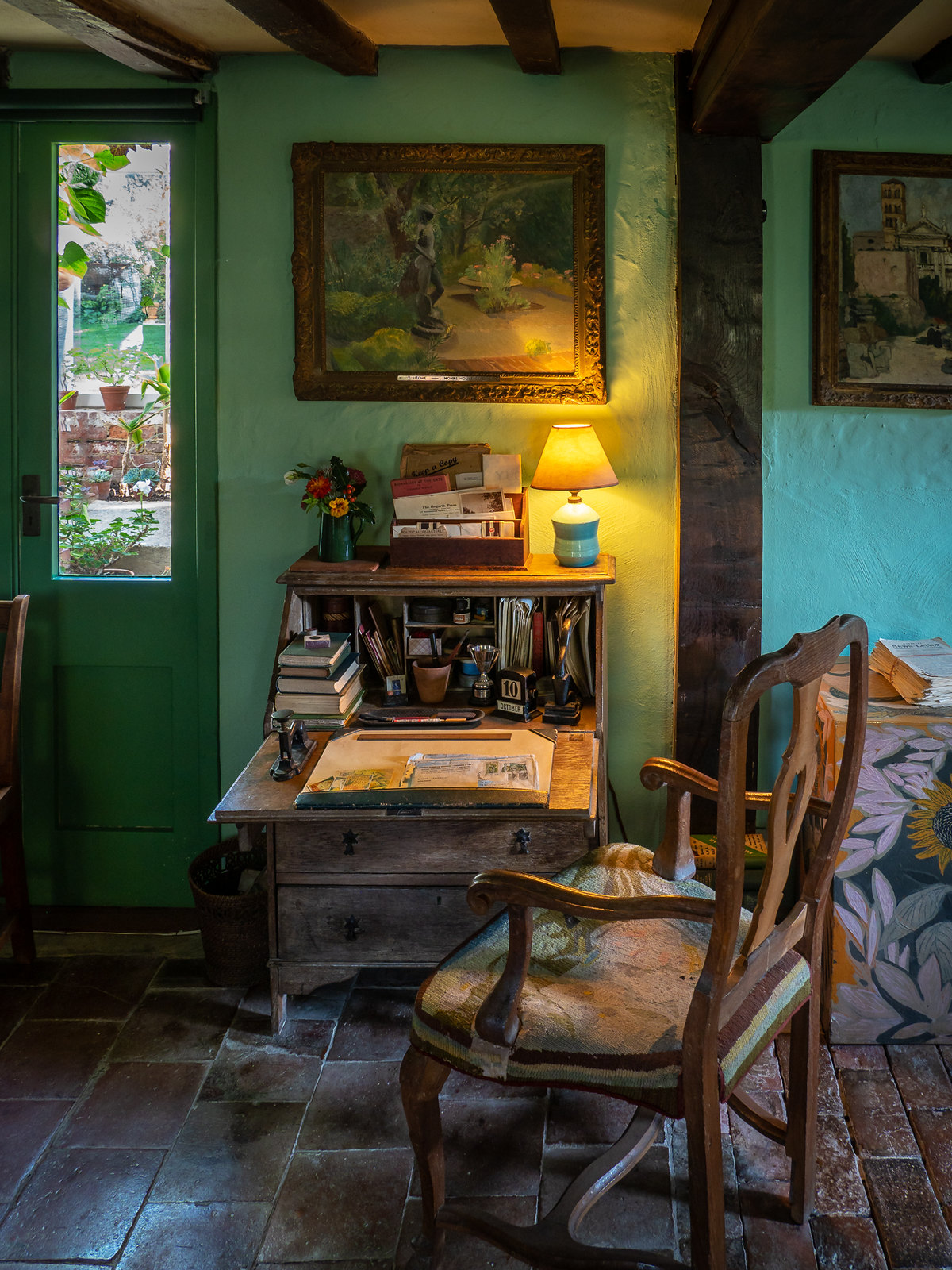 For my part, I don’t think I’ve ever stayed in a little house I didn’t like.

I remember lodging in a cabin on a lake in Ontario for a week one summer when I was five and feeling that it was a sanctuary.

When I was 11 and 12 I went to camp and reveled in the coziness of cedar walls and bunk beds, the surprising sanctity of vespers, and the smell of sulfury well water, sweet-scented bug spray, and coconuty suntan lotion — in a little cabin.

I guess I went to a crappy camp when I was 10 and that cabin sucked, but when I was 23 I stayed in a cabin in Northern California that nourished me. For a period of years I used to sojourn in a peaceful cabin on Lake Erie on my way to school in Vermont. When I turned 30 we spent my birthday up north in Wisconsin in a soothing cabin, watching the stars and listening to the lake water lap against the pier.

And a couple years ago I went to a writers’ retreat in the redwoods, where I felt like my tiny writer’s cabin was my own private mushroom.

Soon after that I started reading a book called At Home in France by New Yorker and New York Times editor Ann Barry.

Barry owned a little stone house in the south of France called Pech Farguet, or “the hill of the little forge.”

Composed of a living room and a kitchen on the first floor and a bedroom and bath on the second floor, it is indeed a little house. One day I’ll visit it and feel an affinity with a writer who for many years spent a week or two escaping her American life and reveling in the magic of the little house.

I imagine it to have as much enticement as this fairy retreat in Tourrettes-Sur-Loup:

Recently, my soul has felt quenched in tiny cave houses in Greece:

Right now I live in an average-sized house, but I’ve always found myself craving the envelopment of a tiny house.

My tiny house doesn’t have to be in the woods per se, but it should be nestled among pine trees and willows. It should be made of wood and stone. And it should embody the repose of Owl’s little house, or Frog’s or Toad’s.

It should, by the nature of its size and the simplicity of its nature, do what Gaston Bachelard said of dream houses in The Poetics of Space. It should…

Because that’s what the tiny house is for those of us who crave one: A burrow that connects us with the home inside of ourselves.